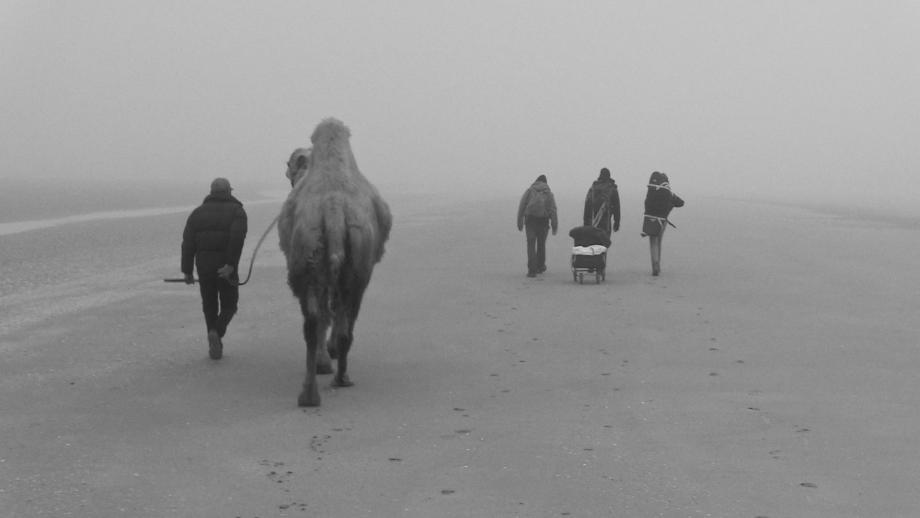 As We Walk is the result of an amazing undertaking: a walk along the Belgian coastline in the company of a camel, two fellow musicians and a camera crew. Hanne De Backer (inspirer of g a b r o) presents the film in conjunction with a live concert.

The idea may at first suggest semi-heroic hubris, but As We Walk is not a frenzied, megalomaniacal project, but rather a surprisingly subdued registration that lets image and music speak for themselves. De Backer is joined for the music by drummer Raf Vertessen and pianist Andreas Bral.

Armed with backpacks, winter coats, hats and an inseparable wagon, the three musicians, together with their camel and camera crew, set off across empty beaches, fog-shrouded dikes and through dunes, accompanied only by the murmur of the North Sea and the whistle of a biting wind. They improvise in the sand, in a church, on a breakwater. Sometimes with turbulent spontaneity, but just as often with hypnotic sounds. The film moves at its very own pace and shows the Belgian coast in all its battered glory, but just as striking are the surprised and amused looks of casual passers-by. The impression that lingers most, however, is that of a concentrated calm, an attempt to slow down time imbued with a dreamy, almost melancholy poetry.

The screening of As We Walk will be followed by a trio concert by Hanne De Backer with Andreas Bral and Raf Vertessen.