>> tickets with timing 17:15 are with train tickets

>> tickets with timing 18:20 are without train tickets (you come with your own transportation to Mechelen!) 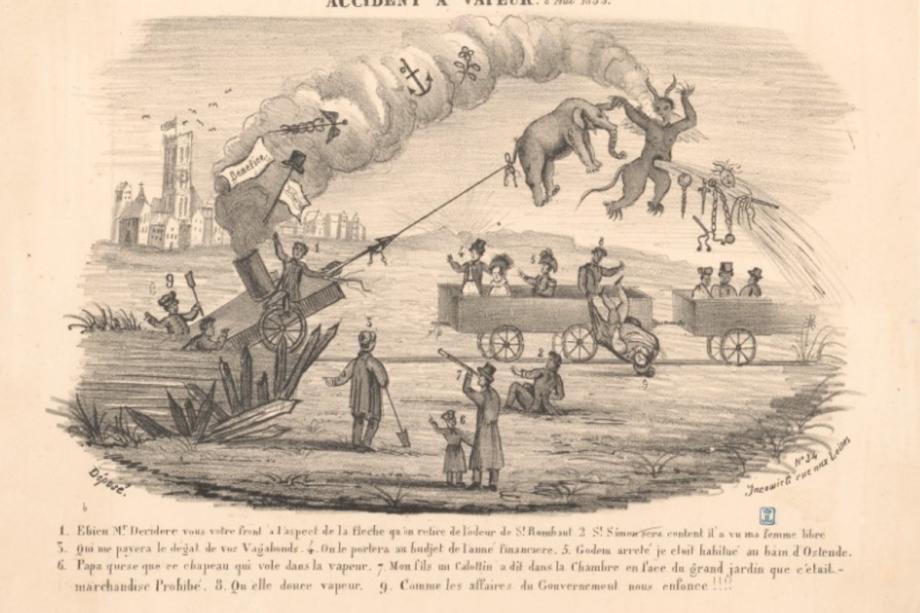 This specta­cular event, which EUROPALIA developed together with Ictus Ensemble on the occasion of EUROPALIA TRAINS & TRACKS, will pay tribute to the first passenger train ride on the European continent that took place on 5 May 1835, between Brussels and Mechelen. The public is invited to board a private train in Brussels to the Central Workshop in Mechelen.

Practical info for ticketholders WITH train:

Practical info for ticketholders WITHOUT train: For this occasion, this huge industrial site, where trains and train parts are built and restored, servicing Belgium's railway network, opens its doors for the first time. Visitors are invited on an artistic voyage full of extraor­di­nary audio and visual perfor­mances by contem­po­rary artists  such as Ictus Ensemble, Ann Eysermans, Myriam Pruvot and Fritz Hauser. In collabo­ra­tion with Europalia, Ictus Ensemble, NMBS, Mechelen Central Workshop, ChampdAc­tion.

>> tickets with timing 17:15 are with train tickets

>> tickets with timing 18:20 are without train tickets (you come with your own transportation to Mechelen!)

Ictus Ensemble brings the impressive “Ballet Mécanique”. A companion to the ultra-machine-like approach of George Antheil, the self-proclaimed "Bad Boy of Music" of the 20th century. Ballet Mécanique (1924), the original version which Ictus will re-enact (slightly revamped), was an attempt by the American composer George Antheil, the painter Fernand Léger, and the director Dudley Murphy to offer a multimedia experience before there was even a name for it. Ictus will propose the original idealistic and madly startling version of 1924. Stravinsky's dissonance stretched to the limit, the unflagging repetition, the chemistry at work in the machine-like heavy-handedness and the lightning speed – all of these ingredients succeed in making the Ballet Mécanique a wholly unique work in the history of the 20th century.

From the ashes of Ballet Mécanique rises 'Bezel', a work by Mario Garuti for two double bass recorders: futuristic-looking instruments, as if designed to reveal the performers’ breathing and moving bodies.

And finally you will experience Gordon Monahan’s kinetic performance 'Speaker Swinging'. First performed in 1982, the performance is an experiment for nine swinging loudspeakers, audio oscillators and LED lights, set in rotation by the performers in a particuliar “athletic gesture. The idea comes from hearing such things as Leslie speakers, moving vehicles with broadcasting sound systems, airplanes, and other moving sound sources, both industrial and organic. The subsequent acoustical processes of phasing, vibrato, and tremolo are fundamental to the work, as are the elements of sweat, struggle, fear, and seduction.

The immersive performance “Schraffur” by the Swiss composer Fritz Hauser is based on the “scratching” of various objects and tools found in the workshops of Mechelen. A mix of percussion and scratched sounds will be created by a large group of participants, resulting in a special soundscape inspired by the sound-universe of trains.

Arriving on the site, you will be guided to Ann Eysermans’s unique site specific performance: 'a prelude for 2 diesel locomotives and harp'. This line-up may at first seem incompatible and strange to you. But opposites attract. Two train drivers conjure up the impressive and nostalgic sounds of the HLD 5404 and HLD 6041 locomotives. The sounds of locomotives idling, and those of compressors and air escaping as well as the roaring transition to a higher speed are all part of their sonic potential. The harp interacts with fragile micro sounds, solid chords and circular movements to create a remarkable counterpoint and melodious interweaving of sound.

During the train ride, you will be accompanied by a sound performance by Myriam Pruvot. By using the various announcement “voices” of the NMBS, Pruvot has created a new narrative to lead you into a sonic voyage to Mechelen.