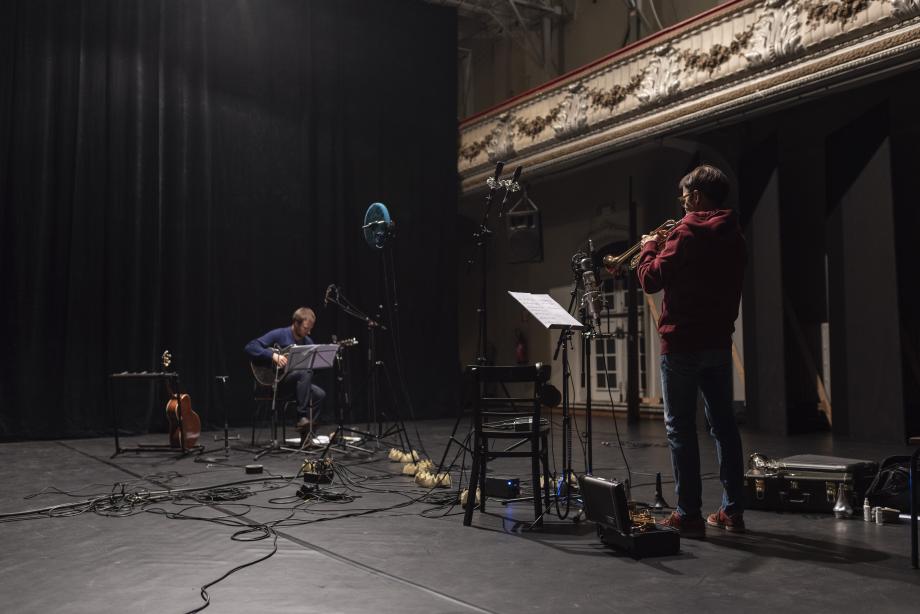 Once again Machtelinckx (a.o. Linus, Poor Isa) opts for the purely acoustic. With improvisations that are anything but hermetic, unusual guitar tunings and a focus on textural experiments. And with eight vintage Machtelinckx compositions, with singable melodies and strong harmonies.

A Short Story is a meeting of two gentle musicians - Ruben Machtelinckx & Arve Henriksen - from which nothing but quiet music can emerge, so straightforward that it hurts a little. The album is the result of a very first meeting and the excitement that brings.

Arve Henriksen is one of the world's gentlest, sweetest and purest trumpeters. He was a member of the groundbreaking Supersilent, is one of the four players in the quartet Warped Dreamer (with Belgians Teun Verbruggen and Jozef Dumoulin) and has released more than a dozen albums under his own name, mostly with the exceptional label Rune Grammofon. He has been part of projects by Christian Wallumrød, Trygve Seim and Trio Mediæval, among others, which found a home at ECM.

In the summer of 2021, the two artists locked themselves up for a few days in art centre Nona and the result is A Short Story, released on the fine label Aspen Editions, of which Machtelinckx is one of the driving forces.

Jukwaa - Thijs Troch (piano), Nils Vermeulen (bass) and Sigfried Burroughs (drums) - is among the most unpredictable bands in Belgian jazz and related zones. If their 2014 self-titled debut was an album that kept the piano trio's conventions within reach, but was never willing to follow them, then successors Harbinger Of Imminent Ruin (2015) and Cushion (2018), respectively, were a plunge into uncompromising experimentation and a kind of subdued but intense frame story in which each piece offered a different perspective.

After those side-steps, Jukwaa returned to its core line-up. On their new, meanwhile fourth album Adapt (WERF Records), they present two long pieces exploring the possible faces of a piano trio. In doing so, they seamlessly and effortlessly switch instrumentations, with piano, bass and drums alternating with banjos, fiddles and percussion. Each decision arises from the urgency to work with intuition and the need to shake off automatisms. Form and content are constantly superimposed in ever-changing constellations, in which jazz, improvisation, minimalism and contemporary sounds reinforce each other.

As usual, this concert will also excel in a refreshing lack of conventionality and pigeonholing.