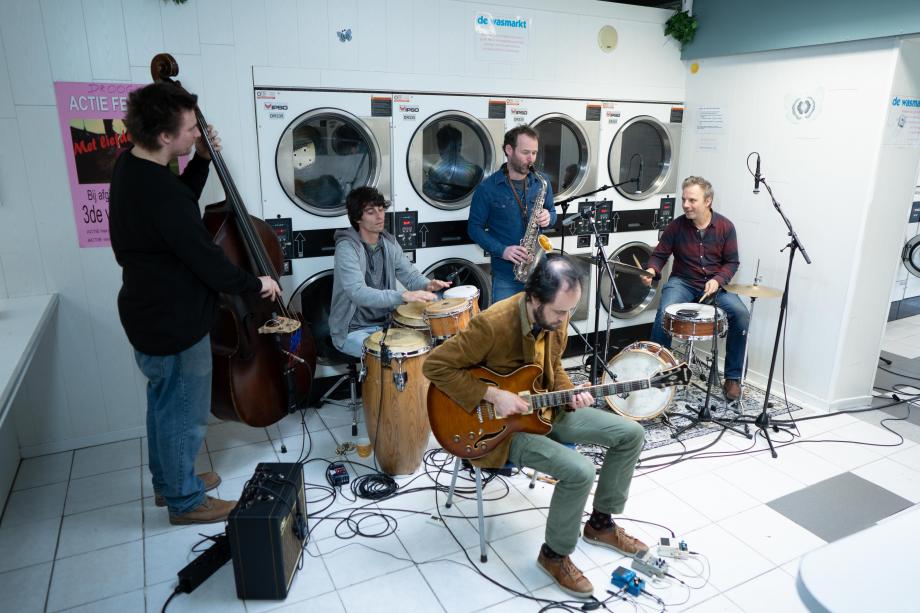 Bruno Vansina is best known for his work in the wind section of Flat Earth Society (FES), but he has also played with Ewout Pierreux Quintet, Rebirth Collective, Scoreman and more. Vansina has brought in one of today’s most original guitarists in the form of Benjamin Sauzereau (Les Chroniques de l’Inutile, Hendrik Lasure warm bad). The impressive young bassist Cyrille Obermüller (HAST) has grown into an established name on the Belgian jazz scene in no time at all. Percussionist Falk Schrauwen (Echoes of Zoo), another upcoming talent, provides extra rhythm and colour. And with the omnipresent Teun Verbruggen (Blind IO, The Bureau of Atomic Tourism, FES, etc.) as the driving force behind the quintet, this collaboration can only lead to creative abundance.

The story behind 12 12 is a fascinating one. In 2018, the band went off on a year-long musical adventure. Every month, the musicians took their instruments to 12 unusual places such as a skating rink, motorway, velodrome or fairground. The challenge was to play with the location. Every month resulted in a short film, and at the end of the year they had a 12-chapter musical story in images.

In this concert series, the films of the locations form an alternative graphic score. The images direct the music, but the musicians also react to the mages. They will do this for the first time for us, followed by 11 other concert venues. Our question is: is it possible to translate a location into music? Find out the answer on Wednesday 12 January 2022.