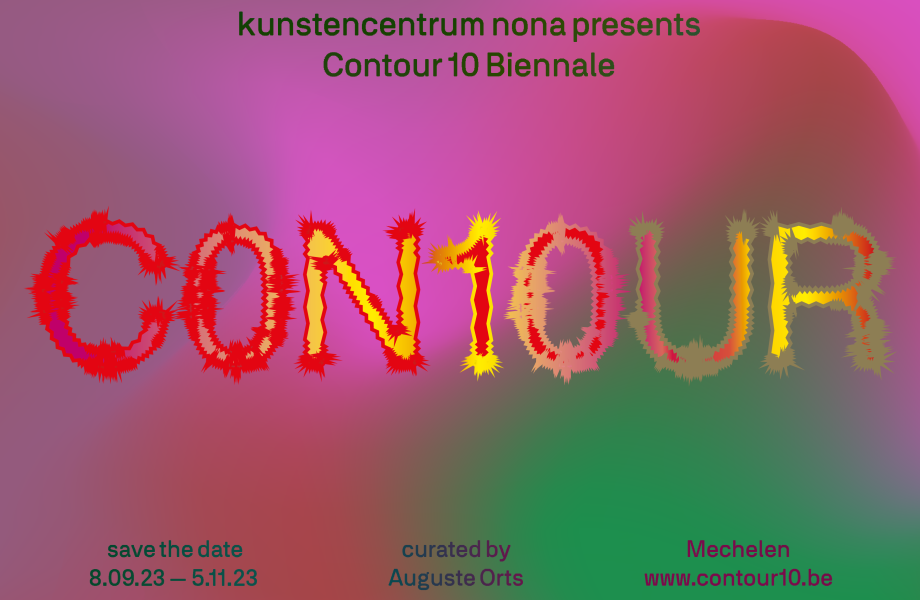 Since 2003, the Contour Biennale for Moving Image has occupied a distinct position in the visual arts in Belgium, with a fame that resounds far beyond the national borders. Focusing on screen works, the 8-week exhibition in the historic center of Mechelen also offers installations, sound works and live arts. C0N10UR is produced and presented by nona arts centre. Its 10th anniversary edition runs from September 8 to November 5 in 2023 and is curated by Auguste Orts.

Auguste Orts is a Brussels-based production and distribution platform founded in 2006 and currently led by artists Herman Asselberghs, Sven Augustijnen, Manon de Boer, Anouk De Clercq and Fairuz Ghammam. Since years, they each have been exhibiting and screening their (audio)visual work internationally, including at previous editions of the Contour Biennale (De Clercq and de Boer in 2005, Asselberghs in 2009 and Augustijnen in 2003 and 2013). Over the past decade, the platform has presented itself as a strong advocate of the artists’ moving image (AMI), advancing and strengthening the field with On & For Production and Distribution (2014-2021), its international collaborative project supported by the Creative Europe Programme of the European Union.

During C0N10UR, the five Auguste Orts’ artists will not present their own screen works. Instead, they will plug into the rich Belgian ecosystem of artists' film practices and contribute to its sustainable development by supporting new screen works that will be able to lead their lives well after the 8-week span of the actual exhibition. Orts resolutely opts for local embedding: the core artists of diverse origins invited to this festive Contour edition reside in Belgium. Multiplicity is essential to this exhibition project: a gathering of artists and works in which different generations can coincide and various forms and formats of the moving image can enter into the conversation.

C0N10UR is staking on an ongoing dialogue with the artists, organisations, institutions and all actors involved. The biennial builds upon its experience with creative production deployed for an extended period of time. The curators of this edition show a clear passion for the moving image and the visual arts, a love for cinema and its audiences, as well as for the performing arts and live music, both central to the regular program of the nona arts centre. Throughout a full and varied program, C0N10UR aims at putting a poetics as well as a politics of the moving image front and centre.